Much of the conversation about the finances of Australians focuses on housing, mortgage interest rates and the level of debt for Australian households. How many of us have thought about the level of life insurance we have and whether the level of cover is appropriate?

Most working Australians maintain a level of Life Insurance, either within their Superannuation or as a stand-alone policy. However, it is highly like that we are not fully aware of the level of cover we have or whether we have appropriate cover. This article looks are how Australian’s measures up against citizens of other comparable nations, the impact of underinsurance and suggests that the industry should renew efforts to educate consumers about levels of appropriate insurance.

How to end a conversation

If the topic of broader financial advice gets discussed, there is usual some comment about rogue advisors and maybe some opinions about the commission models that support financial advisors. What very rarely gets discussed is life insurance and in particular appropriate levels of cover (and if the topic comes up, it can often be a conversation killer).

Are we really underinsured?

According to Lifewise.org.au, Australians are amongst the most underinsured people in the developed world[1]. The statement is based on 2007 research produced by Swiss Re showing that in terms of insurance density (or premiums paid per capita in USD) Australia ranked 16th amongst comparable industrialised nations. At that time, Australians paid on average almost $1,700 USD per person per year in Life Insurance premiums (versus, say, $4,000 USD in the Netherlands). The report also showed that insurance penetration (or premiums as a percentage of GDP) was 3.8%, well below the average of industrialised nations at almost 8%, and even below the global average of 4.4%. These numbers would appear to suggest that Australians are underinsured. The difficulty in this statement, however, lies in whether premiums are proportional to cover provided and if premiums can be compared across nations. It is hard to compare cover within the local Australian marketplace, let alone across international borders, where fluctuations in currency exchange rates compound the issue. Also, insurance premiums are typical impacted by recent claims experience – insurance will cost more if lots of people are claiming – so policyholder behaviour in individual countries will impact on the cost of cover. It should be noted that Lifewise was set up by members of the Financial Services Council specifically to raise awareness of underinsurance.

How much is enough?

What is more sobering is the 2010 Lifewise report[2] produced in partnership with NATSEM, showing the impact of underinsurance on a hypothetic family with parents in their 30’s and 2 young children. The report references an industry recommendation that “a person with dependants should have Life insurance that will allow the family to reduce their debt to zero and provide them with seven years of income (equal to three-quarters of their current disposable income)” in the event of a death or total and permanent disability. Using a scenario of typical cover held, the report estimates that in the event of one parent dying, the remaining family would be left with around 50% of their previous income. 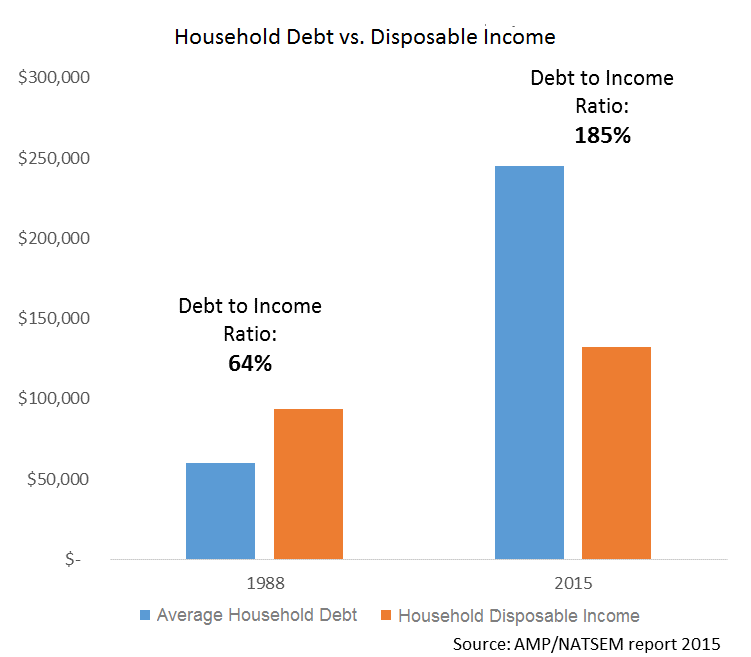 Using data from a more recent NATSEM collaboration with AMP[3], average household debt in 2015 was $245,000 with average household disposable income of $130,000 per annum. Current average superannuation balances for someone in their mid-30’s is around $42k for a man and $35k for a woman. Applying the recommendation from above would result in Death/TPD cover requirement of something in the region of $550k to $600k per parent (or up to $1.2m per household), depending on individual circumstances. Furthermore, the 2010 paper recommends Income Protection cover that provides three quarters of current disposable income.

Putting all this in simple terms, larger debts and a higher disposable income should mean increased insurance cover yet according to some sources, only just over 50% of us have Life Insurance at all, and those of us that do typically just have the default cover provided by our super fund unless we have been advised by a financial adviser. The financial services consultancy Rice Warner estimate that young families only have about cover for 30% of their needs[4] (interestingly, they also estimate that young families need cover for around 10 times annual income, higher than the NATSEM report). 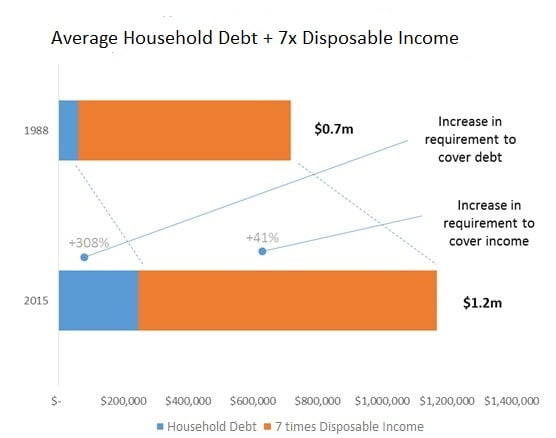 What should be done?

So, if we are underinsured, what is to be done? Some of the challenge in the industry comes from record high claim rates, which has diverted attention away from educating consumers about appropriate levels of cover. Also, providers are bunking down as the industry faces renewed questioning of financial advice models. However, with rising household debt levels, now is precisely the time that consumers should be educated about the importance of providing a secure future for their loved ones. Perhaps there is room for more general guidance about the importance of Life Insurance, outside of the sales of individual policies. However, when even the Government’s own advice on the MoneySmart[5] website points to ASIC’s 2014[6] report highlighting the 37% of consumers that received inappropriate financial advice, who can blame the public for being confused and cynical?

This blog does not represent financial advice. If you are interesting in understanding more about your insurance needs you should seek advice from a qualified professional adviser who will take into account your personal circumstances. What we are saying, however, is you should consider your insurance arrangements when reviewing your financial situation, and as an industry we should do more to educate consumers on what is appropriate.

Shoreline is a specialist asset and wealth management consulting firm with offices in Singapore, Sydney and Melbourne. Shoreline provides advice and implementation services that combine our deep business and IT expertise with our industry knowledge. For more information, please visit www.shorelineawc.com